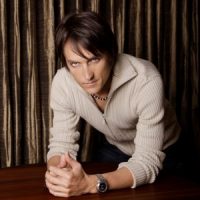 Chris Chameleon is a South African musician. Chris was born as Chris Mulder on Wednesday, 28 July 1971. He is currently a solo artist, and was previously the lead singer and bass guitarist for the band Boo!. Chris has experience as an actor, making his debut in Franz Marx's Sonkring in the early 1990s and also performing a role on 7de Laan as a musician. An Afrikaans album titled 7de Hemel was released which contains music he wrote for his character in the show.