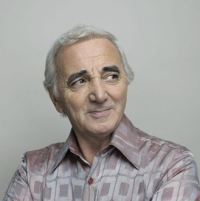 Shahnour Vaghenag Aznavourian OC OQ is a French and Armenian singer, songwriter, actor, public activist and diplomat. Besides being one of France's most popular and enduring singers, he is also one of the best-known singers in the world. Aznavour is known for his unique tenor voice: clear and ringing in its upper reaches, with gravelly and profound low notes. He has appeared in more than sixty movies, composed about a thousand songs (including at least 150 in English, 100 in Italian, 70 in Spanish, and 50 in German), and sold well over 100 million records.