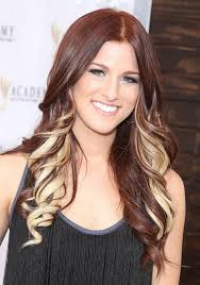 Cassadee Blake Pope (born August 28, 1989) is an American singer-songwriter, musician, and is the lead vocalist of the pop rock band Hey Monday, which is currently on hiatus as of December 2011. With the band she released the studio album Hold on Tight and three EPs. Pope embarked on a solo career which was announced in December 2011, but reassured fans that the band had not "broken up." In early 2012, she played her first acoustic solo tour before releasing her debut solo EP in May later that year. She took part in the third season of NBC's The Voice and was crowned the winner on December 18, 2012. She became the first female winner of The Voice. Her debut solo country album, Frame by Frame, was released on October 8, 2013. The album debuted at #9 on the Billboard 200 and #1 on the Top Country Albums charts, and was preceded by Top 10 country single, "Wasting All These Tears".