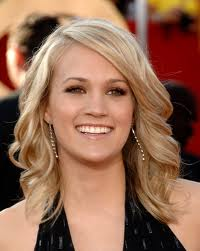 Who would have thought that the shy girl from Checotah, Oklahoma who used to sing in the church of her hometown and has no formal training in voice or singing would become a star? Not her parents, not her friends, not even herself and not even when she was competing on the American Idol’s fourth season in 2005. Though, Carrie Underwood did become a star, an Idol champ, a multi-platinum country successful singer and a good actress, surpassing her own expectations. “In the beginning my entire goal in being on Idol was to make enough money to go back to school when I got kicked off,” she said to a notorious magazine. “Obviously, I was pleasantly surprised.”

And since her beginnings as an American Idol winner, Underwood stepped deeper and deeper on the rose rug of her career. The modest girl who was raised in a small farm from a very small town, grew up and won several Grammy Awards, three Academy of Country Music and Country Music Association Female Vocalist awards, a GMA Dove award, two ACM Entertainer of the Year award, she has become a member of the Grand Ole Opry and received a Golden Globe Award nominee. Besides, she is also the first-ever female artist to win back-to-back Academy of Country Music (ACM) Awards for Entertainer of the Year (2009/10). And can you believe that she has her own official day? Yes, May 25 was declared Carrie Underwood Day in Oklahoma.

Each of her albums was certified with platinum: Some Hearts, 2006 - seven times; Carnival Ride, 2007 - three times; Play On, 2009 - two times. So it’s not surprising why her fans, who call themselves the Care Bears, are desperately waiting for her fourth album. Underwood says that the album is a work in progress that “It’s shaping up, at its earliest form, to be very eclectic.” “I always look for vocally challenging songs. It’ll be me, but hopefully more progressive,” she said smiling, adding that she even started writing for her next album because, as she confessed, she wants to give her fans “the best album possible.”

As for recent foray into acting, Underwood’s fans are absolutely delighted, as she played the role of youth pastor Sarah Hill in the “Soul Surfer” that depicts Bethany Hamilton’s tragedy (the champion Hawaiian surfer lost an arm during a shark attack). She is opened to new acting opportunities but her music career comes first, as well as her husband, Ottawa Senator hockey player, Mike Fisher, who she married in July, 2010.