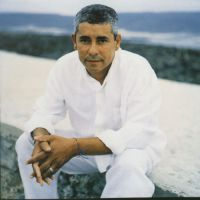 Gerard Mendes (born 1952), better known as Boy Gé Mendes, is a Cape Verdean musician. He was born in Dakar, Senegal and was raised in the city's Cape Verdean diaspora community. As a child, he grew up in a household filled with the sounds of the native morna and coladeira. But he was also exposed to the music of his adopted land and to the music of Mali, Guinea and other west African countries. His early music career even included singing rock, rhythm & blues, and Cuban music, which were all popular genres in Senegal at the time. Mendes eventually settled in France where he teamed up with his brother Jean-Claude, Manu Lima, and Luis Silva to form Cabo Verde Show, one of the most popular Cape Verdean bands of all time.