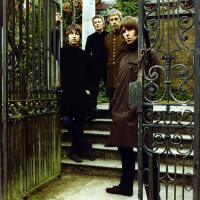 Beady Eye are an English rock band formed in 2009. The band consists of singer Liam Gallagher and guitarists Gem Archer and Andy Bell, formerly of Oasis, rounded by drummer Chris Sharrock who substituted for Oasis during their last tour in 2008/2009, before the band broke up after chief songwriter and lead guitarist Noel Gallagher quit acrimoniously in August 2009. The remaining members gathered on and decided that they "will not quit making music together" and so they formed the band Beady Eye. In 2013, former Kasabian guitarist Jay Mehler joined the band.