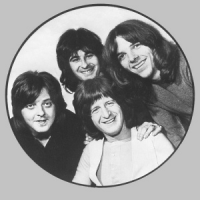 Badfinger were a British rock band consisting originally of Pete Ham, Ron Griffiths, Mike Gibbins and Tom Evans; active from 1968 to 1983, and evolving from The Iveys; formed by Ham, Griffiths and David "Dai" Jenkins in Swansea, Wales, in the early 1960s. Joey Molland joined the group in 1969, following the departure of Griffiths. Signed by the Beatles' Apple label in 1968 as The Iveys, they adopted the name Badfinger in 1969. Badfinger had four consecutive worldwide hits in 1970 and 1971: "Come and Get It" (written and produced by Paul McCartney), "No Matter What", "Day After Day", and "Baby Blue". The Ham/Evans-penned Badfinger song "Without You" became a Billboard number one hit for Harry Nilsson.