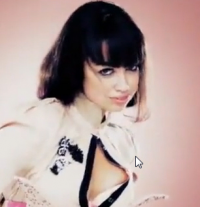 Maria Louise Joensen (born January 21, 1985 in Copenhagen, Denmark), professionally known as Aura Dione, is a Danish singer-songwriter of Faroese, Spanish, French and Danish origin. In 2008 she released her debut album, Columbine which as of 2011 has sold 100,000 copies worldwide. The album spawned the hit single "I Will Love You Monday (365)" which reached number one in Germany, and was certified platinum for shipments of 300,000 copies.