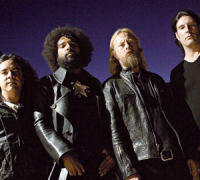 Alice in Chains was an influental grunge rock group initially formed by lead singer Layne Staley (1967-2002) in the mid-1980s as Alice N' Chains before changing the spelling. Along with Nirvana, Pearl Jam and Soundgarden, Alice in Chains was one of the most commercially successful bands to break out of the Seattle, Washington grunge music scene. Unlike many of their peers, the Alice in Chains sound owed more to heavy metal than to punk or '70s rock. The band became associated with the grunge movement due to their Seattle roots and introspective, sometimes morbid, lyrical content.

The band signed with Columbia Records in 1989 and released a demo album, Sweet Alice, followed in July 1990 by the We Die Young EP. The title track became a moderate hit on metal-oriented radio, setting the stage for the release later that year of the group's first full LP, Facelift. The album spawned an unexpected hit with the crunchy and infectious "Man in the Box," the video for which went into regular rotation on MTV. Supported by a tour opening for Van Halen and Iggy Pop, Facelift achieved gold status by the close of the year.

The band next released an unexpected collection of purely acoustic compositions as the EP, Sap, which also featured guest artists Ann Wilson of Heart, who joined Staley and Cantrell for the chorus on "Brother," as well as Mark Arm of Mudhoney and Chris Cornell of Soundgarden, who appeared on the song "Right Turn" (credited in the liner notes as Alice Mudgarden).

The group received more exposure in 1992 when one of their new songs, "Would?", appeared on the soundtrack for Singles, a motion picture by filmmaker Cameron Crowe revolving around the lives of a number of Seattle singles. The early release helped build anticipation for the group's next LP.

The album Dirt, released in the fall of 1992, exemplifies the group's heavy, guitar-driven, distortion-drenched sound. It was both a critical and a commercial success, going platinum by the end of the year. The impenetrably dark lyrical content, however, dealing mostly with isolation and addiction, stirred speculation that Staley had sunk deeply into a serious heroin addiction. We now know beyond any doubt that these rumors were true.

While the band was touring to promote Dirt, Mike Starr left the group to be replaced by former Ozzy Osbourne bassist Mike Inez. The band reformed in the studio once again in 1993 to record two new songs, "What the Hell Have I?" and "A Little Bitter", for the soundtrack of the Arnold Schwarzenegger film, Last Action Hero.

During the summer of 1993, Alice in Chains joined bands such as Primus, Tool, Rage Against the Machine, and Babes in Toyland for the alternative music festival Lollapalooza, where the band was very well received. It would be the last time, however, that Alice in Chains would headline a tour.

After their explosive performances on the Lollapalooza tour, the alternative music scene braced for another hard, angry, loud release from the Seattle quartet. In January, 1994, however, the band stunned fans and critics with Jar of Flies, a return to predominantly acoustic numbers, well-developed pieces complete with subtle string arrangements fused perfectly with exclamation points from Cantrell's signature electric guitar attack.

Released as an EP, though of album caliber in design and length, Jar of Flies debuted at No. 1 on album sales charts, the first EP release to ever do so. Evolving from the alternative, progressive sound of the first track to more traditional ballads, the album seems to pay respects to Cantrell's musical roots. While the songs were all written and recorded in a single miserable and alcohol-laden week, some critics hailed it as a mini-masterpiece.

The band stayed off the road for the remainder of their run, adding fuel to speculation about Staley's addiction. Nonetheless, Staley performed a few shows with Gacy Bunch, a "Grunge Super Group" side project formed in 1995 with Pearl Jam guitarist Mike McCready and Screaming Trees drummer Barrett Martin. They later renamed themselves Mad Season and released a single LP, Above.

In November 1995, Alice in Chains returned with the release of a self-titled album, Alice in Chains, commonly referred to as "Tripod" or "Three" due to the image of a forlorn three-legged-dog on the album cover, and because it was the band's third full album. As with all their releases, the album again evolves the group's sound, now relying more on melody and textured arrangements than before ? some see the album as the child of Dirt and Jar of Flies. The album debuted at number one on the charts, but the group again failed to support it with a tour, sparking further discussion about Staley's heroin addiction. Ultimately, this would be the last official album that Alice in Chains produced.

The group surfaced again in 1996 to perform their first concert in three years on MTV Unplugged, a program featuring all-acoustic sets. Staley was in visibly poor health and also seemed to be under the effects of heroin, but nonetheless the group gave an outstanding performance, including a stunning rendition of "Down in a Hole". The group reworked their harder material with fresh acoustic arrangements and included a rhythm guitarist to round out the sound. They also introduced a new song, "The Killer Is Me". An album and a DVD of the performance was released later that year, the album debuting at number three on the charts.

After the Unplugged show, the band opened for four shows on the KISS reunion tour. Their performance at July 3rd in Kansas City was the last concert Alice in Chains gave with Staley as lead singer.

Cantrell wanted to keep the band together and tried to stay in touch with Staley, but it became clear that Staley's health would not allow him to return to work any time soon. Cantrell began work on his first solo album, Boggy Depot, along with remaining Alice in Chains members, Mike Inez and Sean Kinney, as well as the band's producer, Toby Wright.

In 1998, Staley reunited with the other members of the group for the last time to record two more songs, "Get Born Again" and "Died." These songs were released in the fall of 1999 on the career-spanning box set, Music Bank. The set contains 48 songs, including rarities, old demos, the two new recordings, and a majority of the album cuts. The group also released Nothing Safe: Best of the Box, which served as a 15-song sampler of Music Bank, as well as their first best-of compilation. The two new recordings, "Get Born Again" and "Died," would be the last songs that Staley would record, while Music Bank would be the last release of new studio material from the band. A live album, Live, and a 10-song greatest-hits compilation, Greatest Hits round out the group's official releases. Later, in 2004, Sony announced the release of a third Alice in Chains best-of compilation, The Essential Alice in Chains, a double album set including 29 songs.

Although the band never officially disbanded, Staley spiraled deeper into depression when his girlfriend died following a bacterial infection caused by drug use. He became reclusive, rarely leaving his Seattle condo. The possibility of a full-on Alice in Chains reunion finally ended on April 20th, 2002, when Layne Staley died in his condominium from an apparent lethal overdose of heroin and cocaine, a little over eight years after the supposed suicide of another icon of grunge, Kurt Cobain of Nirvana.

Jerry Cantrell, shaken by the death of his friend and bandmate, dedicated his second solo album, Degradation Trip (2002), to Staley. The album was partially complete at the time of Staley's death, but Cantrell added songs lamenting the loss of his friend and partner.

In 2005, Cantrell, Inez, and Kinney reunited to perform a benefit concert in Seattle for victims of the Tsunami Disaster that struck south Asia. The band included former Damageplan lead singer Pat Lachman as its primary vocalist. Surprise guests Wes Scantlin of Puddle of Mudd and Maynard James Keenan of Tool appeared to chip in with vocal duties, and Ann Wilson of Heart guest-starred to reprise her co-vocals on "Brother." The surviving members of the group reportedly enjoyed the reunion, and Cantrell said it felt right playing with his old band again and having Lachman as lead singer. He commented, however, that playing without Staley "left a big hole." He does not see another reunion coming soon, but says it is a possibility.