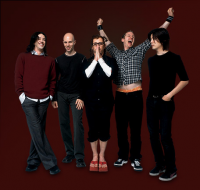 A Perfect Circle (often referred to as APC) was an alternative rock band, formed by guitarist Billy Howerdel. Howerdel had worked as a guitar tech for bands such as Nine Inch Nails, The Smashing Pumpkins, Fishbone, Guns N' Roses and Tool. During the recording of Tool's ?nima album, he played demos of his music to Tool's singer, Maynard James Keenan, who, although Howerdel originally wanted a female singer, offered himself as vocalist should Howerdel form a band.

Joined by The Vandals drummer Josh Freese, drummer Tim Alexander of Primus and Laundry, ex- Failure guitarist Troy Van Leeuwen, and bassist/violinist Paz Lenchantin (later of Zwan), the band rehearsed the music that Howerdel had begun and finished their debut album Mer de Noms (French "Sea of Names"). At this time Tool was tied up in negotiations with their record label, allowing Keenan much time to complete the work.

Between Lenchantin leaving the band for Billy Corgan's new band Zwan and Van Leeuwen becoming the new guitarist of Queens of the Stone Age, the band was in need of a new bassist and guitarist for their live performances. These positions were taken over by ex-Marilyn Manson bassist Jeordie White (formerly known as Twiggy Ramirez) and ex-Smashing Pumpkins guitarist James Iha.

The band released their second album, Thirteenth Step, in September 16, 2003. A third album, eMOTIVe was released on November 2, 2004, which contains anti-war cover songs of artists such as John Lennon and Joni Mitchell. eMOTIVe was recorded with various different past and present members of APC, but mostly by Keenan and Howerdel.

On November 16, 2004 the band released the DVD and CD set entitled aMOTION. The set contains the music videos to the singles, as well as some previously unreleased videos, along with b-sides and remixes.

A Perfect Circle is currently on hiatus, partly due to Keenan's commitments with Tool. A Perfect Circle experienced a considerable amount of downtime during recording, release and tour for Tool's previous album Lateralus. This makes the band extremely dynamic in terms of its members. During the downtime, other members of the band seek other projects which can mean they are unavailable when APC is reformed, which was the case with both Troy van Leeuwen and Paz Lenchantin.

Freese continues to work with The Vandals. They are currently working on a new studio album, which is due out in summer/fall 2006. He is also scheduled to participate in the reunion of DEVO.

Iha was asked to participate in the reunion of The Smashing Pumpkins, in order to have the line-up completed, but he has not confirmed that he will join.

Keenan recently said in an interview with French magazine Rock Hard that he thinks A Perfect Circle is over. Billy Howerdel confirmed this by saying there were no plans for a new album or tour.