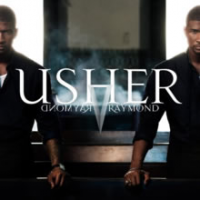 Raymond v. Raymond is the sixth studio album by American R&B singer Usher. Following the success of his platinum selling 2008 release “Here I Stand” and with over 27 million albums sold, Raymond v Raymond takes you on a journey through the dichotomy of man.
Raymond v Raymond opens up another chapter of Usher’s coming of age as he tells the story of balancing the challenges of day to day life as an evolving man while jumping back on the scene as a sex symbol and fearless superstar entertainer. With the help of some of the biggest producers in music including Polow Da Don, Jim Jonsin (Lollipop), Danja (Sober), and Jimmy Jam & Terry Lewis, Raymond v Raymond is sure to paint a vivid portrait of growth, triumph, defeat and happiness.

“Papers” was released as a buzz single from the album on October 28, 2009. Despite being only a promotional release, it peaked at number 31 in the United States, and also topped the US R&B/Hip-Hop chart for two consecutive weeks.

“There Goes My Baby” was the first promotional single. It was released on iTunes and it has reached a current peak at number 29 on the US R&B/Hip-Hop chart. Following it’s digital release, it debuted at number 71 on the Billboard Hot 100.

“Lil’ Freak” featuring Nicki Minaj was the second promo single, released on March 2, 2010. It has peaked at number 28 on the Hot R&B/Hip-Hop Songs chart based on airplay alone.

“More” will be the third promo single, to be released on March 16, 2010. The song is being used to promote the 2010 NBA All-Star Game on TNT. A promo video was shot, it is intercut with scenes used to promote the game and Usher performing the song with stage lights behind him. Usher performed the song at the NBA 2010 All Star game at the Dallas Cowboys stadium on February 14, 2010. Also, two videos for the song were shot in December 2009 by two all-teen film crews as part of the Body By Milk Got Noise? program. Fans are given the chance to watch both videos and vote for their favorite.

“Hey Daddy (Daddy’s Home)“, which features Plies, was released as the first single on December 8, 2009. The single has reached a current peak at #47 in the Billboard Hot 100 chart and #10 in the Hot R&B/Hip-Hop Songs chart.