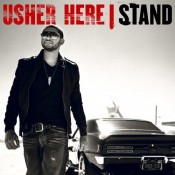 ‘Here I Stand‘ is American R&B singer Usher’s fifth studio album, released on May 27, 2008 in the United States.

Multi-million selling RnB superstar Usher returns with the follow up to 2004’s ‘Confessions‘. ‘Here I Stand’ contains a range of diverse sounds, from club hits to slower paced love songs.

The album finds Usher working with some of the best producers and writers around including Polow Da Don, Jermaine Dupre, Dre & Vidal and Dream & Tricky Stewart.

The first official single from the album, “Love in This Club”, was released in February and debuted on Billboard magazine’s Hot R&B/Hip-Hop Songs chart at number 51.

On May 21, 2008 the video for “Moving Mountains” was released on Usher’s MySpace page.