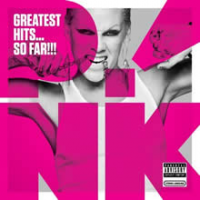 Greatest Hits… So Far!!! is a greatest hits album by global superstar Pink. The album was released on November 12, 2010, via LaFace Records. The album features three new songs, “Heartbreak Down”, “Fuckin’ Perfect” and the lead single “Raise Your Glass” which reached the Top 10 in several countries.
Since her debut in 2000, P!nk (Alecia Moore) has successfully paved her way on her own terms as a talented singer/songwriter/performer. Over the past two years, Pink has extensively performed sold-out performances throughout Europe, Australia and the U.S., winning over critics and fans. To date, the Pennsylvania native has earned the status of a global superstar, P!nk has sold over 30 million albums, over one million DVD’s, and nearly 20 million iTunes tracks worldwide.

“Raise Your Glass” was released as the album’s lead single to radio in the first week of October, and was officially released for digital download on October 7, 2010. The track is produced by Max Martin, and co-written by Pink & Shellback. According to Pink, the song is dedicated to those who “felt that were not a part of the popular crowd”. It debuted at #1 on the ARIA Singles Chart, giving Pink her fifth number 1 in Australia.

It became one of P!nk’s biggest hits ever, peaking at #4 in the USA, becoming her second highest charting song, along with “Get The Party Started” and “Most Girls”; both which peaked at #4 in the USA.

“Fuckin’ Perfect” debuted at #10 on the ARIA Singles Chart, being her seventeenth top 10 in Australia.
Pink is truly one of the most remarkable ladies of the music industry of recent years. Melding the fusion of Punk and Pop and bringing her absolute true all ‘tell-it-how-it-is’ style has allowed her to become something of an inspiration to millions of people across the globe! She has proved her versatility over the years, and Get The Party Started, Just Like A Pill, So What! and Who Knew have become songs which have very much defined the past decade of music.