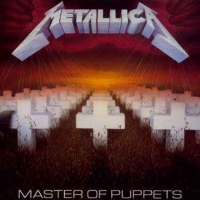 This album is the pinnacle of all music. Beautiful, creepy, depressing but not whiny lyrics, the greatest disply of guitar talent ever created by man, and beautifully designed rhythm music that compliments the absolutely brilliant guitar and vocal leads on the album. I am jealous that I didn't have a part in creating this masterpiece.

AWESOME ALBUM.ITS PURE HEAVY AND THRASH METAL.ITS ONE OF THE BEST ALBUM OF METALLICA.
KIRK SOLOS ARE REALLY SUPERB.EXCELLENT SOND QUALITY .ITS COVER IS NOT UP TO THE MARK BUT STILL NO ONE HAS THE BUSINESS WITH ITS COVER.I RATE THIS ALBUM 10/10.THE SONGS WHICH TOUCHED MY HEART ARE BATTERY,SANITARIUM AND MASTER.
ACC. TO ME RATINGS SHOULD BE:
1)BATTERY=10/10. RHYTHM GUITAR IS GOOD AND SOLO IS THE BEST. A ROCKING SONG.
2)MASTER=10/10.SOLO IS THE BEST AND IT IS MY BEST SONG.
3)THE THING THAT SHOULD NOT BE=9/10.A GOOD HEART TOUCHING SONG.
4)SANITARIUM=10/10.INTRO AND SOLO IS REALLY COOL.
5)DISPOSABLE HEROES=8.5/10.WORST SONG OF THIS ALBUM BUT STILL NOT BAD.
6)LEPPER MESSIAH=9/10.DRUMING AND SOLOS ARE VERY GOOD.
7)ORION=10/10.INSTRUMENTAL SONG MUCH BETTER THAN CALL OF KTULU AND SEXY GUITAR RIFFS.
8)DAMAGE=9.5/10. BORE SONG IN INTRO BUT GOOD IN OUTRO.

Master of puppets is the best album of metallica.Solos are outstanding and sond quality is superb. MY BEST SONG IS SANITARIUM,MASTER & BATTERY.

Album was produced by METALLICA AND FLEMMING RASMUSSEN

This is a close tie with their other album, Kill 'Em All. This is the last album with Cliff Burton, because he died September 27, 1986. Songs include:
1. Battery
2. Master of Puppets
3. The Thing That Should Not Be
4. Welcome Home (Sanitarium)
5. Disposable Heroes
6. Leper Messiah
7. Orion
8. Damage Inc.

This is a great album and should be included in every household in the world.

This album is unreal. The sounds Kirk and James get out of their guitars is brilliant. Master Of Puppets and Welcome Home(Sanitarium) are some of Metallicas finest work.

Excellent album. It keeps a very nice tone from start to finish. Too bad cliff burton had to go. RIP cliff

I love this album. It is so heavy and dark it helps when your in angry mood. it gets your blood flowin'. Kirk Hammet's solos are amazingly fast

Metallica's second best after Kill em' All.
Battery, Master of Puppets, and Welcome Home (Sanitarium) all combine the insaneness of Hammett's solos , and Hetfield's transitions from Metallica's unique metal sound to catchy and slow riffs. Even for the not-so-hardcore metal fans Orion is a great instumental for the people who are not too accustumed to Metallica.

Reviews of my 2 favorite songs from this album:

Arguably the greastest metal album of all time.

This incredible piece of musical artwork is definately metallicas best work ever, this album has everything: electryfiying guitar riffs, extereme guitar solos and incredible vocals thumbs up.

If you like fast thrash, then this album is for you. It has eight tracks, but each is fairly long. In this album it REALLY shows the speed/power of James Hetfields palm-mutes in Battery and Disposeable Heroes.

Overall amazing album. I think that this album is the heaviest of Metallica, and the best of Metallica. The best track on it is a tie between Battery and Master of Puppets, with Disposeable Heroes close behind. Leper Messiah has a very catchy guitar riff. I think the only two songs that were not made to go nuts over is Welcome Home (Sanitarium) and The Thing That Should Not Be. Damage Inc. has an AMAZING guitar solo, and not only is it incredibly fast, it sounds good!!!