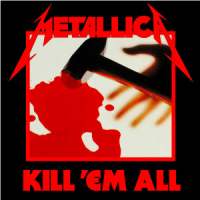 This is the best album by Metallica. It has great sound, even for their first recording. The sound is unique. They never recreated their sound in any other album. Songs includes (not in order):

Jump in the Fire

They fired Dave Mustane right before they flew to NY to record this album. They needed a good guitarist. That is when they found Kirk Hammet. He has been a member ever since.

This Album is my favourite album of all time. Hit The lights, The Four Horsemen and of course you cant leave out the song that started the Thrash Metal revolution, you know which one it is and if you don't then your weird. it's SEEK AND DESTROY!!!!!!The above songs arent the only gems on this album there is the awe inspiring bass tune of Anastesia(Pullin Teeth) and the screeching vocals of Hetfield on Metal Melitia. So all in all i'd give this album 100 out of 10

This album is Metallica at their best. The sound quality is brialliant, Hetfeild's vocals are brialliant and the songs are brialliant! Hit The Lights and Seek And Destroy my favourite Metallica songs, their from 1983 and I love them and Im only 13. It shows that albums can be almost immortal if their good enough.

This is an excellent thrash album. I love the guitar riffs, they just capture the true force of real metal in that time.

This is Metallica's first and truly outstanding album. Filled with awesome solos, lyrics, and guitar riffs, it IS A MUST HAVE FOR ANY METALLICA FAN! However any Metallica fan who does not own any 80's Metallica album's has not experienced what Metallica is!!!