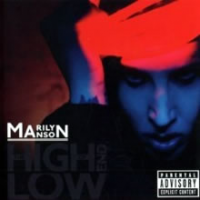 The High End of Low is the seventh studio album by American musician Marilyn Manson.
The album marks the highly anticipated reunion with longtime friend and foil Twiggy Ramirez, together for the first time in nearly a decade. Produced by Manson, Vrenna and Twiggy, the album was recorded in his Hollywood Hills studio.

Manson says of the new album, “I think my life definitely ended and began. The record sounds very final, but it’s almost optimistic - though that feels like a strange word to use. It’s a phoenix from the fire and a redemption resurrection.”

The album’s first radio single “Arma-goddamn-motherfuckin-geddon” was released on May 14, 2009.
‘The High End of Low’ debuted at #4 on Billboard 200 with 49,000 copies sold. Despite reaching a higher charting position than Manson’s last studio effort Eat Me, Drink me which debuted at number 8, it arrives with the lowest opening week sum of any of Manson’s albums since The Last Tour on Earth began with 26,000 in 1999.

The album as a whole is a triumph, with Manson also exploring his more introspective side. Twiggy has shown himself to be a great songwriter and he took over the guitar duties again with great results.
Manson is one of the few genuinely colorful rock-stars around and he has delivered yet another solid album to his impressive resume.

Manson will also kick off his world tour with a headline festival run this June in Europe.