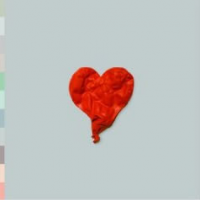 Kanye West returns with his fourth album ‘808s & Heartbreak‘. His highly anticipated new album is set for release on November 24, 2008.
The album heavily features West singing with the aid of an ‘auto-tune’ device, he has claimed that ‘808s & Heartbreak’ is a ‘pop’ album. Typically for West, ‘808s & Heartbreak’ features high profile guests such as rappers Young Jeezy and Lil Wayne, as well as additional production from Herbie Hancock on the track ‘Robocop’.
He has left his old style behind, that being the hip hop genre and moved on to a more R&B, pop style, which if your an old school Kanye fan can mean bad news.
Kanye once again have reach his expectation, the most impressive thing about 808s & Heartbreak is how all tracks were produced and written by Kanye, something we don’t see a lot of these days by other artists.

The first single ‘Love Lockdown‘ premiered live for the first time on the 2008 MTV Video Music Awards. The song quickly exploded at radio with the video premiering nationwide on the Ellen Degeneres show. ‘Heartless‘, the second single, is next up to hit the airwaves further amplifying the story behind the musical direction for ‘808s & Heartbreak’.
The entire album is sung by West with the aid of Auto-Tune, aside from one verse by Young Jeezy, a duet with Lil Wayne, additional vocals by Kid Cudi and a freestyle by West at the conclusion of the record. West has stated that he loves using Auto-Tune and is dismayed that the term has been commonly associated with being “wack”. He considers the technology “the funnest thing to use.”
He later stated that he wishes to present the music as a new genre called “pop art“, not to be confused with the visual art movement of the same name.