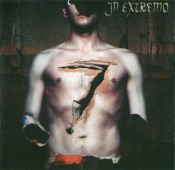 I bought this album because I loved the last In Extremo albums, "Suender ohne Zügel" and "Verehrt und Angespien" and thought, okay, In Extremo, nice music, buy it. But I was terribly disappointed: Obviously success got to their head. They changed their style, and now they sound more like pop music than metal. If you recall the embarassing show on VIVA, you can see where this once great band is going. There's only one really good track on this album, "Ave maria", which they interpreted rather... original... *cough* Really nice, though. The beginning sounds a bit like the live version of Alice Cooper's live version of "Poison", but that could be coincidental. Other songs which I liked were "Sefardim" and "Pferdesegen". But most of the CD was not very original and quite boring. Actually, looking at the track list, I can't remember some of the songs. (And I don't want to hear them again, I usually remember good songs) But there were also two pieces that really pissed me off. Needless to say, those were the most successful... "Erdbeermund", I don't know who wrote that song, but it was NOT In Extremo, and I hate bad cover versions. The original is actually quite good (I don't like the text, but okay), but In Extremo completely ruined it by doing a version for stupid teenagers. (I'm waiting for the day they're doing a Backstreet Boys cover) And the worst song on this CD is absolutely "Küss mich". The complete refrain melody is stolen from some football club hymn. How stupid could they be? I think it's quite embarassing. And it sounds... what football club hymns sound like... Primitive, and only enjoyable when you're hopelessly drunk.