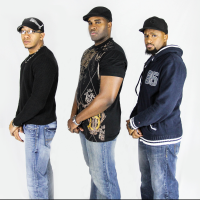 Hostyle Gospel is a dynamic Christian hip-hop group merging musical talent with the Word of God to point people to Christ. With pulse-pounding rhythms and raw lyrics, Hostyle Gospel is igniting a fire of passion for God across America.

Though they reference the Gospel as hostile, hostility is merely the method of delivery. Through this, they provide edgy compilations that merge with terse messages to create a sense of urgency to a generation in need of something more. Hostyle Gospel is armed with the raw energy of their performances and the ammunition of their faith; thus, Hostyle Gospel is appealing to young and old alike.

Hostyle Gospel Ministries originated in 2003 from a central Illinois group called The Elite M.O.C. (Men of Christ). After the founders dispersed to individual ministries, two members, Proverb (Raynard Glass) and King Soloman (Demetrius Morton), began to refine their vision for the group. Big Job (Fontaine Pizza) was added in 2005 as a frontline member, joining them in performances and on recordings. Since 2005, the group has added more members, which serve in music production, graphic design, and web administration.

On March 21, 2009 Hostyle Gospel teamed up with Christian Rap Artist “Flame,” Teen REACH of Vermilion County/Project Success, and the Boys and Girls Club at Danville High School Auditorium to impact local churches and teen groups in Danville. Currently, Hostyle Gospel has completed two albums and four mixtapes and is currently working on their third album, which will be released mid-2013. The group continues to grow, along with the number of people who have found Christ through the music of Hostyle Gospel.

Hostyle Gospel ministers to today’s generation in a way that is both relevant and entertaining. The live shows include a mix of original songs and lyrical, Christ-centered re-mixes of Top 20 hits from major artists. Performances flow more like a worship experience than a concert. The crowd is invited to join in on the praise and to focus on worshipping God. The Gospel is prominent in every aspect of their presentation, whether it be rapping, dancing, or preaching.