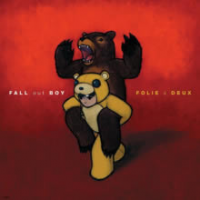 Fall Out Boy - Folie a Deux

Folie a Deux is the fifth full-length studio album album by Des-Moines pop-punkers Fall Out Boy. It was released on December 13, 2008.
The album was announced in a typically dramatic style, with band leader Pete Wentz leaving a series of cryptic clues across the internet leading up to the date of the 2008 American Presidential Election. Wentz has revealed Oasis as an inspiration for the album, as well claiming it has’folk styles’.
‘Folie a Deux’ is a brilliant album in it’s own right, but just doesn’t stand up against some of Fall Out Boy’s earlier work. A must for any FOB fan and open-minded music lovers alike, but be sure to give it a few chances as many of the songs are growers and will need more than one listen to really be appreciated.
There are definitely some raw moments, and they guys have not forgotten where they come from. The album should grow on everyone who is really willing to give this band a chance.
In its debut week, the album sold over 150,000 copies to place at number 8 on the Billboard 200.

Fall Out Boy released several singles on iTunes, which, when purchased would go towards purchasing the entire album.
The first single, I Don’t Care was first released on September 3, 2008. It was followed a month later by Headfirst Slide into Cooperstown on a Bad Bet on October 7, 2008.
The third single, What a Catch, Donnie, was released a short time later on October 15, 2008, followed by the final single, America’s Suitehearts, which was released on December 2, 2008.
If your already a fan of Fall Out Boy, especially the last 2 albums, then there’s a good chance you’ll really enjoy Folie A Deux. Don’t even question it, just get it and enjoy it.