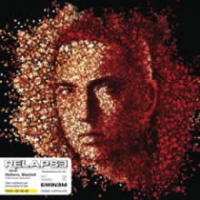 Relapse is the sixth studio album by Detroit-born rapper Eminem.
He has sold more albums than most Rock and Pop superstars. He’s a Grammy winner. He’s an Oscar winner. He’s been on the cover of practically every music magazine since his debut album dropped in 1999. Now, 10 years after The Slim Shady LP, Eminem marks his 10th anniversary as a Hip Hop hurricane with Relapse.
The album is produced entirely by Dr. Dre, except for one song Eminem (real name Marshall Mathers) produced himself. According to Eminem, to work with Dr. Dre allowed him to concentrate on the processes of songwriting rather than the production, which was taken care of by Dre himself.
It was released by record label Interscope Records, along with subsidiaries Aftermath Entertainment and Shady Records, first on May 15, 2009, followed by May 19 in the United States. Relapse is Eminem’s first studio album since Encore in 2004, thus ending the rapper’s musical hiatus.
The album often harks back to some of his 1990s material, blending comedy with remarkable lyrical flow. Meanwhile, fans also are treated to the reflective, emotional content that has given Eminem’s music its depth over the years. Buy it and enjoy it, it will be a classic in years to come

“Crack a Bottle” was released as digital download as a promotional single on February 2, 2009 it reached the number one position on the U.S. Billboard Hot 100, according Eminem’s manager Paul Rosenberg, a music video for the song was produced and directed by Syndrome, but has not been released thus far.
The music video of the single “We Made You” was aired on April 7, and became available for purchase a week later on April 13. The video was directed by Joseph Kahn.
On April 28, the third overall single for the album, “3am“, was released once again for paid music download. The music video for “3am” was directed by Syndrome and filmed in Detroit.
Two more singles were distributed prior to the album’s release, as “Old Time’s Sake” and “Beautiful” went on sale on the iTunes Store on May 5 and May 12 respectively.