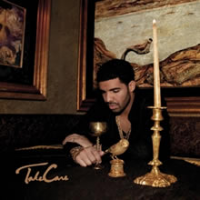 Take Care is the second studio album by Grammy-nominated Canadian superstar Drake, released November 15, 2011, on Young Money Entertainment and Cash Money Records.
Drake’s “Take Care” - A Reflection Of His Sensitivity
Chicago Tribune described him as being “too soft, too sensitive and does too much crooning” but Drake has always been a sensitive man in tune with his inner state. If you look back at all that he has accomplished you’ll notice that everything bearing Drake’s signature is deprived of that macho pose adopted by the majority of MCs and the emotional priors. But let’s talk about his latest album, “Take Care“.
He’s only 25 and he has already a well-received 2009 EP and mix tape, and a million-selling 2010 debut album, “Thank Me Later.” It seems that despite all criticism, on this album, which is in fact its second, the Toronto MC remains resolutely himself and even improves his introspective tone. The album reminds us a bit of his “emo” side in search of his misunderstood soul and of Drake’s musical beginning. He practically hones his sensitivity and blurs the line between singing and rhyming even more, becoming instantly divisive. The truth is that showing emotion does not make him a wimp and not everyone can listen to his music. To understand Drake’s music, one has to be open-minded. For instance, he starts the album with something about his career last year, warning everybody that he is still on top in “Over My Dead Body”. “I think I killed everybody in the game last year, man” he sings with more confidence.
The second track on the album, “Shot For Me”, shows a new side of the Toronto-born Aubrey Drake Graham. He is no longer the good guy understanding his former loved one. He enjoys seeing the anger and unhappiness that she has with her new boyfriends, he sings that he’s the man, and she can’t replace him no matter what she tries, contrasting with the image he has created about himself in his first album, “Thank Me Later.” “Headlines” brings nothing new in the picture, some critics said it’s quite “annoying”, others that it has been “over-played”, we say that it is fun to rap along. But, if for some people, “Headlines” is a disaster, the fourth track, “Crew Love” certainly does not disappoint anybody. It’s the result of an amazing collaboration with The Weeknd, it’s about putting on your crew, and making sure they get love too. Drizzy has another song on this album, which is also a featuring with The Weeknd, “The Ride.”
Moreover, the single that gives the album its title is a featuring with Rihanna and it’s a dedication to anybody who’s ever been in love and hurt deep or who has been put in a situation where your heart was telling you one thing and people tried to tell you otherwise. The lyrics of this song speak directly to those who don’t know who or if they can trust again and to those who truly need someone to “take care” of them. You’d be surprised to find out how many fans relate to this song. “Look What You’ve Done” is an ode Drake makes to his mother in this first verse, trying to convince her to quit smoking and rapping about the arguments they had.
But Drake’s jealousy comes back in “Marvin’s Room”, followed by the interlude “Buried Alive” featuring Kendrick Lamar: “Looking in the mirror I’m embarrassed, I’m feeling like a suicidal terrorist.” The upbeat track “Underground Kings” is followed by the bass heavy track “We’ll Be Fine” with slow flow paying homage to Aaliyah in the first verse. Nevertheless, featuring is this album’s main characteristic. Besides The Weeknd, Rihanna and Lamar, Drake sings along with Nicki Minaj in “Make Me Proud”, Rick Ross in “Lord Knows”, Stevie Wonder in “Doing It Wrong”, Lil Wayne in “The Real Her” and “HYFR”.
Overall, “Take Care” is an album that you really need to sit down and enjoy and you’ll have a whole different appreciation for it every time you hear it. It’s Drake’s reflection in the mirror so if you’re a fan you’ll know how to appreciate it, if you’re not a fan you should give it a try and hear the songs Drake has to offer and you will be a better person. Keep your mind and heart opened to emotional expression and take care.