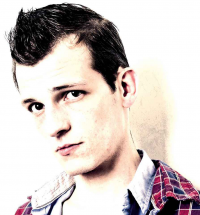 As a ten year old, DENIS LUCAS was already enthralled by music composing and broadcasting. As CD players did not exist, he was making do with cassettes to put together a private radio-show. Technological progress enhanced his passion and his hobby became a real obsession by the time he was 21. The music nerd became a music pro, always striving to improve his performance. At 24, he launched his first track. GET HIGH ON YOU was a real club banger, a hit from the very start, opening the gates to success.

He is now working on various new projects in collaboration with some of the big boys, Zippora as vocal for Rise & Salt, with Rick de Hey and Dennis Cartier remixing it. Many other projects are taking form.

Watch this producer closely, his drive to discover fresh talent and developing it, keeps him a bit in the shade and he loves that.

He loves to play the underdog, to surprise everybody in the end.
Known by one and by all from Australia to Canada and Russia, he is now ready to conquer Belgium.