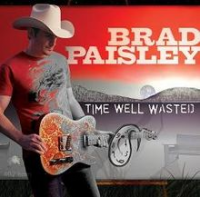 Brad Paisley's album, Time Well Wasted, follows on the success of Brad's previous three albums. Brad's first album, Who Needs Pictures was released in 1999 and immediatley put him on the music map. This album was followed by Part II and then the huge hit album: Mud On The Tires. Now Paisley gives us his new studio album. As usual, his lyrics are as funny as can be and his guitar playing is top-notch. Alcohol, the first hit off this album, features some fairly easy guitar chords and some exciting guitar riffs put together to create one heck of a song. Other album highlights are "I'll Take You Back", "Waitin' On A Woman", "When I Get Where I'm Going (featuring Dolly Parton)", and "Easy Money". Each song has clever lyrics and excellent guitar work. "Easy Money" keeps up a good beat mixed with good guitar playing and tells of how easy life is for professional musicians. Brad Paisley's album, Time Well Wasted, is an excellent album that shouldn't be missed if you like good, well-balanced music.

I simply love this album. Well I love all of Brad's work. I love the way he takes simple ideas and makes them into great songs. He's a very lyrical guitar player which is perfect for his style of songwriting. One aspect of Brad Paisley's music that really stands out is that nobody in the band hogs the spotlight. Each player gets to play a solo in almost every song, or at least contributes to each song in a great way. I had the great fortune of seeing Brad Paisley in February of 2005 at Mohegan Sun Casino and I was truly blown away. Truly one of the masters of the Fender Telecaster!