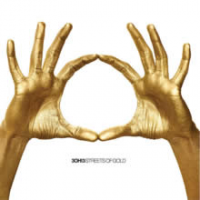 Streets of Gold is the third studio album by Colorado electronic duo 3OH!3. This is their second album to be produced by Matt Squire and released on the record label Photo Finish. The new album will be released on June 29, 2010.

First single, “My First Kiss” was released on their website on May 3, 2010 and has since exploded onto the billboard charts, debuting in the top 10 on the Billboard Hot 100.
3OH!3 released a video for the song “House Party” on April 8 as a teaser for Streets of Gold. The group hired Andrew W.K. to do a rock remix of “House Party”, which was released virally on Friday April 16, 2010. 3OH!3 had met Andrew W.K. at a house party in Memphis, Tennessee.[6]
On May 18, 2010, the song “Touchin’ On My” was released exclusively on iTunes. 3OH!3 plans to release a new song every other Tuesday up to the release of the album. “Déjà Vu” was released on June 1st, and “Double Vision” was released on June 15th. On June 8th, the song “I Can Do Anything” was released to members only on the 3OH!3 website.
The songs “Double Vision”, “House Party”, “Déjà Vu”, “Beaumont”, “My First Kiss” and “Touchin On My” have been played on the Too Fast For Love Tour which will travel North America through mid-June.